McCain, Palin try to mine coal as a final issue 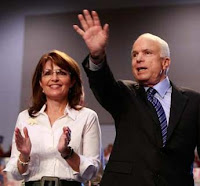 In the final hours of his campaign, John McCain's only new line is that he has been and would be a promoter of coal if elected president, in contrast to Barack Obama. He and Sarah Palin mined the coal issue yesterday in stops in the Appalachian coalfield, critical to their chances tomorrow. (Photo: Chip Somodevilla, Getty Images)

"The candidate who once spoke repeatedly of the need to curb climate change now devotes his speeches to touting the need to boost oil and coal production, two of the biggest contributors to global warming, while campaigning in those coal-producing states," write Shailagh Murray, Juliet Eilperin and Robert Barnes of The Washington Post.

"The one new line he unveiled Sunday -- which his aides said he would use several times during his seven-state swing in the run-up to Election Day -- was to make fun of something" Obama had told the San Francisco Chronicle in January: "The only thing I've said with respect to coal -- I haven't been some coal booster." McCain told supporters in Scranton, Pa., "I've been a coal booster, and it's going to create jobs, and we're going to export coal to other countries and we are going to create hundreds of thousands of jobs. That’s going to help restore the economy of the great Commonwealth of Pennsylvania." (Read more)

Many in the Scranton crowd were "wearing white ball caps emblazoned with 'Clean Coal' on the front," reports Andrew Seder of the Times Leader in Wilkes-Barre. (Read more) For a rundown of the candidates' energy platforms, from Beth Wellington in the Daily Yonder, click here. For a report from Mark Niquette of the Columbus Dispatch, click here.

In Marietta, Ohio, Palin paraphrased Obama: "He said that, sure, if the industry wants to build new coal-fired plants, then they can go ahead and try . . . but they can do it only in a way that will bankrupt the coal industry, and he's comfortable letting that happen." Palin referred to Obama's Jan. 17 interview with the Chronicle editorial board, in which he backed "a cap-and-trade system, under which polluters must buy credits to offset their emissions," reports the Los Angeles Times.

Obama told the Chronicle, "So if somebody wants to build a coal-powered plant, they can; it's just that it will bankrupt them because they're going to be charged a huge sum for all that greenhouse gas that's being emitted." The Times notes, "Palin did not mention remarks Obama made elsewhere in the interview about coal's role in the nation's energy future," such as: "This notion of no coal, I think, is an illusion. ... If we set rigorous standards for the allowable emissions, we can allow the market to determine, and technology and entrepreneurs to pursue, what's the best approach to take." (Read more)

UPDATES: Palin "has kept up her attack on Obama over the remark on the campaign’s final day, linking it to Obama’s 'bitter' comment also made in San Francisco during the Democratic primary," reports Andy Barr of Politico. "The Obama campaign has countered the attacks by saying that the comments were taken out of context and by pointing out the Democrat’s position on coal varies little from McCain’s." For a transcript of the pertinent part of the interview, from Tony Rutherford of HuntingtonNews.net in West Virginia, click here.

"If Pennsylvania is close -- or if McCain pulls off an improbable upset there -- the reason is Sarah Palin, who has stormed the rural parts of that state," the Evans-Novak Political Report says tonight.
Written by Al Cross Posted at 11/03/2008 09:54:00 AM