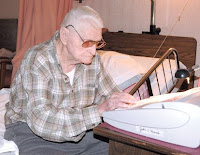 A man who may have been the world's oldest regular newspaper columnist died last week, three weeks short of his 109th birthday. The Rev. John Crystal Morris started writing a column for the weekly Ohio County Messenger in Beaver Dam, Ky., when he was 101. When the paper closed in 2004, he switched to the weekly Ohio County Times-News in Hartford. (Photo by Dustin Bratcher)

"Living in a nursing home, Morris wrote his column on an electric typewriter," the Times-News reported. "The typewriter had paper in it the evening he passed away, according to Sam Ford, a longtime friend and former employee of the Ohio County Messenger." The column, titled “Something to Think About,” ranged from religion to "his memories of the early 20th century and how much life had changed, Ford said." He was believed to be the oldest citizen in the Western Kentucky county of 23,000. Survivors include two sons, four daughters, a stepdaughter, 18 grandchildren, 31 great-grandchildren, 44 great-great-grandchildren and seven great-great-great-grandchildren.

At a regional meeting of the Society of Professional Journalists at Western Kentucky University in Bowling Green in April 2004, Morris was recognized as "the oldest known newspaper contributor around." He told the Times-News, “I am trying to do the best I can with what I’ve got. I try to tell the truth with everything I write out. Sometimes it is a mighty poor best, but I always try to do the best that I can.”
Written by Al Cross Posted at 11/07/2008 01:38:00 PM