One headline on The Washington Post Web site read "Rural residents wary of Obama's America," but the story was only about Monroe County, Arkansas, and the people one resident dealt with during a typical day. The county lies near the heart of "the McCain belt" of counties that voted more Republican last time than in 2004. (Monroe is the red area east of Little Rock, which appears in white.) For the original New York Times map, click here and then on "Voting Shifts." 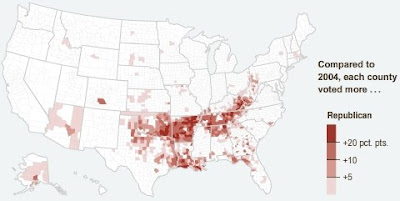 "On the eve of the inauguration, a sense of apprehension prevails in a place that rejected the new president and now warily awaits his version of America," Anne Hull wrote, introducing her itinerary with Wayne Loewer. "The 52-year-old farmer is a conservative Democrat who bet on Republican John McCain and lost, a description that would apply to many in the white South. Now Loewer wonders about his place in Obama's America. 'I'm worried that he's not gonna understand the rural way of life,' he says ... and everywhere he goes, the same anxieties are expressed. Overtly, it's about guns. Less publicly, it's about race.

Loewer told Hull he voted for Bill Clinton, isn't a churchgoer, supports abortion rights and thought McCain would be another version of George W. Bush, for whom he voted. "He was tired of Bush and what he saw as a failed war in Iraq. He thought Obama's farm policies were stronger than McCain's. But he says Obama lost his support when he made his infamous remarks at a private fundraiser in San Francisco about small-town Americans who feel marginalized and 'cling to guns or religion.' Not long after Obama's comments, Loewer received mailers from the National Rifle Association saying that Obama planned to ban hunting, restrict gun laws and close 90 percent of gun shops. Several nonpartisan fact-checking groups discredited the claims, but the gun dealers Loewer talked to said the NRA had it right. 'When Obama got elected, I went out and bought a rifle and pistol shells for every weapon I own,' he says. 'I bought $400 worth of ammo.' Not that Loewer feared Armageddon or a race war; he was stocking up in case the warnings from the NRA and the gun dealers came true." Many other gun owners did likewise.

Hull's reference to race is quckly followed by her report that Loewer "has noticed that blacks around Brinkley ... have a newly emboldened attitude. He's heard about people cutting in line at the grocery store or 'doing a little victory dance at the Kwik Shop.' Loewer shrugs. 'If he brings us out of this mess we're in right now, I'll get out in the street and fist-bump with them,' he says." Later in the story, Hull quotes a co-op manager who says local voters see "second- and third-generation blacks who are living in the projects" and think, "How can we expect somebody like Obama to do a good job when they can't even handle things around here?" But he adds, "I think he's a bright guy."

The last encounter is with Loewer's main farmhand, Phil Hicks, who is black, voted for Obama, and isn't worried that an urban president will neglect rural people. "A lot of people from the South just got that mentality," he says, telling Loewer, "I know you ain't nothing like that." To read the full story, click here. For a transcript of Hull's online discussion with Post readers about the story, click here.
Written by Al Cross Posted at 1/16/2009 05:59:00 PM