The billion-gallon coal-ash spill in East Tennessee has made disposal of such waste "a pressing national environmental concern that has already sparked legislative proposals and the prospect of new regulation," reports Juliet Eilperin of The Washington Post.

The issue has been "largely ignored" though the federal government has deliberated on it for three decades, Eilperin reports. Now, she writes, it may move ahead of climate change on the environmental agenda of the new Obama administration.

"Burning coal produces more than 129 million tons annually of combustion waste -- a concentrated ash that includes toxic elements such as arsenic, lead, cadmium, selenium and mercury -- but federal authorities have yet to establish uniform standards for handling it," Eilperin writes, in a good summary of an issue that affects many rural places. (Read more)

The spill was an eerie reprise for Terri Likens, editor of the Roane County News, the paper published in Kingston, Tenn., next to the site. She wrote a recollection:

It was a biting cold day in December.
I shivered violently as I looked out at a sea of sludge that had swept down and moved homes from their foundations.
Roane County’s Swan Pond?
No.
Harlan County’s Ages Hollow.
It was Dec. 19, 1981, and I was in Eastern Kentucky covering the first big story of my new career.
A coal slurry pond on the hillside over Ages Hollow — in my mind I always hear the word “holler” — had broken open and swept down on the small village. 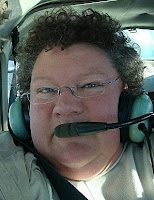 The spill killed a former postmaster who "had predicted her own fate to a mine safety inspector," recalled Likens, pictured flying over the Roane County spill. "I had already gone back to our newsroom across the county line when one of the searchers’ makeshift probe struck something with a little bounce to it. But I had been there when her son arrived, a strapping man wild-eyed with heartbreak. Some things you never forget." (Read more)
Written by Al Cross Posted at 1/16/2009 12:05:00 PM