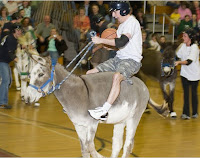 Donkey basketball has been a familiar fund-raising gimmick in rural areas for decades, because folks are occasionally willing to pay a few bucks to see locals ride often recalcitrant asses and try to score baskets, "But the practice has drawn criticism from animal-welfare groups that say the donkeys are mistreated, leading some schools to cancel the events," Katie Thomas reports from Goffstown, N.H., for The New York Times. "That, along with a handful of lawsuits, has left some operators to wonder how long this peculiar slice of Americana will survive." (Times photo by Jodi Hilton)

“There’s going to come a day when there’s no longer going to be a donkey ball,” because of animal-welfare and liability issues, Brenda Amburgey, who owns Circle A Donkey Ball in Henry, Tenn., told Thomas. If you've never seen donkey ball, Thomas provides a pretty good description, which includes the revelation that some of the steeds "are trained to buck or to duck their necks — sending the players sliding to the floor — and referees reward the mischief with carrots. ... The pastime has been around since at least the 1930s, kept alive by fewer than a dozen family businesses that truck the donkeys to school gyms across the country in exchange for a cut of ticket revenue. Company owners say that their donkeys are beloved, spoiled pets, and that their work helps local charities that host the events to raise money."

Animal-welfare groups say donkey ball "is stressful to the animals, who travel long distances and are ridden by inexperienced players," Thomas writes. "The Humane Society of the United States, the American Society for the Prevention of Cruelty to Animals and People for the Ethical Treatment of Animals all oppose the sport. PETA’s campaigns have persuaded schools from Idaho to North Carolina to cancel events." The business is little regulated, partly because the U.S. Department of Agriculture considers it a competition, which not an exhibition, and USDA generally lets states regulate competitions. The Times put the story in its sports section. To read it, click here.
Written by Al Cross Posted at 4/18/2009 10:01:00 AM

Although it is a shame when rural favourites such as Donkey Basketball are no longer enjoyed. However, I think it is important that animal charities monitor activities such as this to ensure that no animals are suffering as a result.