Some key Kentucky supporters of President Obama are asking him to name a well-known Appalachian acdemic the first African Amercian to head the Appalachian Regional Commission.

"I think my being an African American is a profound statement about Appalachia," William Turner, holder of the National Endowment for the Humanities Chair in Appalachian Studies at Berea College, told Dori Hjalmarson of the Lexington Herald-Leader. Turner is the son of a coal miner in the Harlan County town of Lynch and was a former high-ranking official at the University of Kentucky and interim president of historically black Kentucky State University.

Turner's backers include two top officials who backed Obama before Kentucky's presidential primary last year: U.S. Rep. Ben Chandler of Versailles, whose 6th District includes some non-coal Appalachian counties, and Lt. Gov. Dan Mongiardo, from the coalfield town of Hazard and a candidate for the U.S. Senate. Chandler told Hjalmarson that Turner "understands the needs of the sons and daughters of Appalachia" but should expect "a great deal of competition" for the job of federal co-chairman, the top official who works with the governors of the 13 Appalachian states. 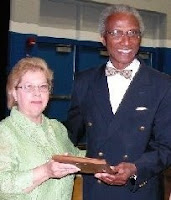 At last month's Appalachian Studies Association conference, Turner received the Cratis D. Williams-James S. Brown Service Award, which ASA gives each year to an individual who has made exemplary contributions to the region. Phil Obermiller of the University of Cincinnati said in his presentation that Turner has been “a pioneer in articulating the role of African Americans in the region. . . . He has used his administrative appointments in various academic settings to promote recognition of the Appalachian region and its black and white residents. Perhaps most important are his unstinting efforts to make higher education attractive and accessible to students from the region." (Photo courtesy of Turner; woman is unidentified)
Written by Al Cross Posted at 4/17/2009 10:19:00 PM