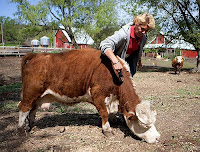 Increasing feed prices have some farmers such as Nebraska's Ali Petersen trading down to "minicows," reports the Los Angeles Times. (Times photo by Chris VanKat)

Writing from Tekamah, Neb., a farming village of 1,900 about 40 miles north of Omaha, P.J. Huffstutter reports that many farmers who once raise normal-sized bovines have turned to minicows because of cost effectiveness and convenience. Researchers have argued that minicows consume roughly half of what a full-size bovine does, and yet produce 50 to 75 percent of the rib-eyes and fillets. "We get more sirloin and less soup bone," farmer Ali Petersen said. "People used to look at them and laugh. Now, they want to own them." The farmers have already sold some of their herd to others in Missouri, Indiana, and Texas, and they say the phone keeps ringing.

Huffstutter writes that dairy farmers too "brag how each animal provides 2 to 3 gallons of milk a day, though they complain about having to crouch down on their knees to reach the udders." Weighing approximately 500 to 700 pounds, mini-Herefords and Angus cows have been around for centuries. Huffstutter reports that big cows emerged in 1950s and '60s, when farmers were more focused on meat and not efficient use of animal feed or land. Today, more than 300 miniature-Hereford breeders are in the U.S., up from fewer than two dozen nine years ago, according to the International Miniature Cattle Breeds Registry. The growth of smaller farms has also promoted the use of minicows, which require less space; one animal needs less than an acre to graze. (Read more)
Written by Aubrey Krekeler Posted at 5/25/2009 10:57:00 PM