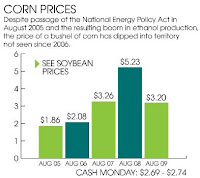 Researchers at the University of Illinois are predicting a net loss of $8 per acre of corn and $15 per acre of soybeans for U.S. farmers this year, the largest loss since the 1980s, Art Hover reports for the Lincoln Journal Star. The price for corn is too low for most farmers to make a profit, but too high to trigger extra federal price supports. (USA Today graphic)

Agricultural economists at the University of Nebraska predict that the Cornhusker State's net farm income will fall from $4 billion in 2008 to $2.5 or $2.6 billion in 2009, a drop of about 35 percent. Farmers who bought fertilizer and other planting supplies before the prices of those commodities and corn dropped will face an even tougher economic outlook, Hover reports. Two positive bright spots for farm profits are a predicted record production this year and the first profit potential for cattle farmers since 2007. (Read more)

The dire predictions for farm profits have led American grocery shoppers to enjoy lower prices at the market. The average retail price for a gallon of milk was down 91 cents, Marisol Bello reports for USA Today, and the average price for a pound of bacon was down 25 cents from 2008. Ag economists blame initial linkage of the H1N1 flu to the pork industry and sluggish corn prices for the drop in prices of farm products, but competition between groceries for consumers during the recession has also played a large role in lower prices at the supermarket. (Read more)
Written by Jon Hale Posted at 9/24/2009 10:49:00 AM