Veal production in the U.S. has long been criticized as inhumane, for its confinement of calves, but a new movement says it is humanely raising them, and argues that not eating veal is the inhumane option. Since dairy cows must give birth to produce milk, and most dairies have no use for male calves, some argue that if you drink milk you should eat veal, Jane Black of The Washington Post reports. 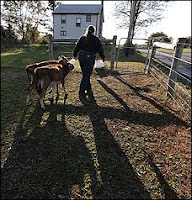 Humane veal raisers feed calves with their mother's milk and pasture grass instead of an industrial milk replacement. The diet creates a leaner meat with a rosy color instead of the traditional white, and it is often called rose veal. The Post reports that rose veal is catching on at some Washington restaurants and farmers' markets. (Post photo by Dayna Smith: Sandy Miller of Newburg, Pa., takes some of her neighbors' dairy bull calves and raises them for rose veal.)

Annual veal consumption was at 8.6 pounds per person in 1944, but hasn't topped one pound per person since 1988. To the common complaint that veal calves are killed too young, advocates say the animals are actually older than chickens, turkeys and pigs at the age of slaughter, and about the same age as lambs. But Ingrid Newkirk, founder of People for the Ethical Treatment of Animals, told Black: "People who think 'rose veal' is 'humane' are seeing the cruel veal industry through rose-colored glasses." (Read more)
Written by Jon Hale Posted at 11/02/2009 12:15:00 PM

As a raiser of rose veal I would not call it a by product of the dairy indurtry, but rather a value added product. It is low in saturated fat and cholesterol, high in nutrients, flavor and taste! that is no by product. We love it and eat it almost every day.

I would add that rose veal is a tastier and healthier option to traditional veal and that the fact that it is humanely raised, which is the contributing factor to its taste, makes an even more attractive meat option.