Number of jobs lost since 2007 varies widely across rural America, county by county

During his State of the Union address last week President Obama said "small towns and rural communities have been hit especially hard" by the recession, but that may not be the case in all such places. Many rural Great Plains and Midwest farming counties have lost fewer jobs than other rural areas, Bill Bishop and Roberto Gallardo report in the Daily Yonder. Still, only 25 rural counties registered decreases in their unemployment rate between 2007 and 2009. Unemployment in rural areas roughly mirrored urban rates in 2009.

"Fourteen of the 50 rural counties that showed the smallest increases in unemployment were in Kansas," Bishop and Gallardo report. "Another 11 were in Nebraska. And 12 more were in the Dakotas," the reporters write. Alabama, site of 12 of the 50 counties with the largest rise in unemployment rates, and South Carolina, home of nines, were hit especially hard by the recession. (Read more) (Click the map to view a larger version) 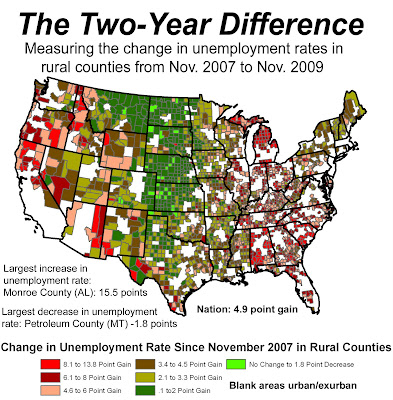