Virginia county says no to wind farm on mountain

A southwest Virginia county has become the latest example of local governments regulating against wind power. The Tazewell County Board of Supervisors voted 3 to 2 to approve "approved an ordinance that prevents wind farm construction on specified locations," Jessica Lilly of West Virginia Public Broadcasting reports. Wind industry supporters told Lilly the decision was the latest example of the "anti-wind agenda" gaining steam.

The conflict centers on a proposed wind farm on East River Mountain, southwest of Bluefield, Va. and W. Va. Dominion Resources and BP Wind Energy announced the $200 million project in January 2009, but several locals spoke out against the project, including friends of a nearby airport, Lilly writes. A representative of the Mercer County Airport, just north of Bluefield, W.Va., said planes using the southwest approach would have to fly higher before dropping sharply to land at the airport. The southwest approach to the airport is used only 10 percent of the time, Lilly reports.

Wind-industry spokesman Frank Maisano told Lilly the decision would be bad for the future of the region: "It’s kind of disturbing to have the very active political anti-wind folks gathering steam and promoting their approach undercutting a message that is good for rural communities." (Read more)

Here's a Google map of the area, with the airport marked. East River Mountain is the largest ridge, in the bottom third of the satellite photo. 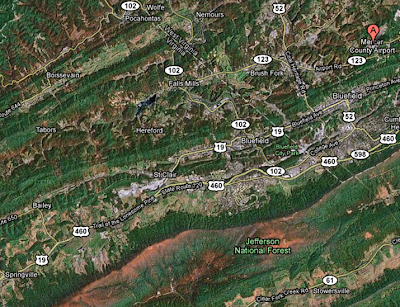 Strange how the very same people are all for allowing mountaintop removal and strip mining in other people's communities and view shed. I guess it is OK to blast and poison people for corrupt coal companies that contribute to campaigns.

The wind industry is just as corrupt as the coal industry. They get control of the land with tricky leases.Follow the money and see who really owns the LLc.(Foreign involvment?) They end up with control of easements, mineral and water rights! The only green in these schemes is the greenback dollar!(Anonymous works for the developer)