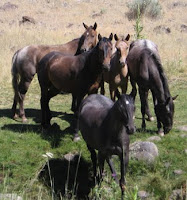 In June we reported the Bureau of Land Management's plan to round up wild horses in the West. Agency officials say they will not abandon the plan despite calls from animal-rights groups to do so after a spike in wild-horse deaths following the plan's early stages. Last week, BLM officials "suspended a wild-horse roundup in northeast Nevada's Elko County after seven animals died," April Reese of Environment & Energy News reports. "Another was euthanized after it broke its leg in a holding pen, and two others died from neck injuries sustained during the roundup. Later, another nine horses died of dehydration." (BLM photo)

"In a letter to Interior Secretary Ken Salazar last week, philanthropist Madeleine Pickens, the Animal Welfare Institute, the American Society for the Prevention of Cruelty to Animals, American Wild Horse Preservation Campaign and other animal rights organizations called for the suspension of all BLM wild horse roundups this summer to avoid further deaths," Reese writes. Don Glenn, division chief of BLM's Wild Horse and Burro Program, said most of the deaths have been because of conditions beyond the agency's control so the roundup will continue as planned with BLM set to capture and remove another 5,800 wild horses and burros from six Western states.

"It's not because we rounded them up. It's because they didn't have water," Glenn told Reese. "It was a combination of a drought and too many horses trying to drink. That's why we do these roundups, because they become overpopulated." Elliot Katz, president of In Defense of Animals, said "BLM has overstated the severity of the overpopulation problem and is removing wild horses from the range unnecessarily," Reese writes. "Furthermore, he added, the agency often exaggerates the health conditions of the herds to justify removals." (Read more, subscription required)
Written by Jon Hale Posted at 7/23/2010 02:27:00 PM