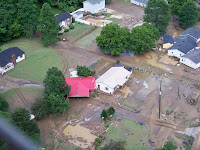 The severity of flooding in Pike County, Ky., last month was  increased by surface mining operations, alleges a lawsuit from 126 Harless Creek residents. "The flooding occurred July 17 on Harless Creek, downstream from where Cambrian Coal Corp. and AEP Kentucky Coal Inc. had mining operations, according to the lawsuit," Bill Estep of the Lexington Herald-Leader reports. "Violations by the companies played a substantial role in 'massive amounts of water' running off the mine sites and turning Harless Creek into a 'raging river' that washed away homes and vehicles in the narrow hollow, the lawsuit says." (H-L photo of Pike County flood)

"The lawsuit comes against the backdrop of an argument by some Eastern Kentucky residents that four decades of mining activity, including clearing areas of native forests and compacting the ground during reclamation, have worsened flash flooding," Estep writes. Coal companies counter no scientific link exists between surface mining and flash flooding, and they work to limit effects of mine sites by reclaiming them responsibly. Tom FitzGerald, executive director of the Kentucky Resources Council, disagreed with those claims, saying "studies have long linked surface-mining activities to a higher incidence of flash flooding," Estep writes.

FitzGerald explained, "Congress recognized the potential for higher peak runoff from mined areas and included in the 1977 surface-mining law such protections as controls on runoff and a requirement to begin replanting part of a site as mining continues nearby," Estep writes, but he notes subsequent administrations have weakened those protections. Bill Bissett, president of the Kentucky Coal Association, told Estep, "Our hearts go out to the people affected by the recent hard rains and flooding," some of whom work in the coal industry, but said without scientific proof surface mining caused the flood the Harless Creek residents would be better served looking elsewhere for the cause. (Read more)
Written by Jon Hale Posted at 8/19/2010 02:22:00 PM