Wally Lage, one of America's most prominent rural newspaper executives, drowned last night in Maine, where he was attending an annual gathering of newspaper executives. Lage, 66, was vice president and chief operating officer of Rust Communications of Cape Girardeau, Mo., a family-owned company that publishes The Southeast Missourian and several other newspapers. He "drowned after stepping off a private boat" in Harpswell, reports Steve Mistler of The Forecaster, a local weekly: "The Sheriff's Department said several witnesses saw Lage slip from the wharf. One person jumped into the water to find him, but Lage never resurfaced. The Sheriff's Department said Lage may have become caught beneath a float, where his body was discovered about 30 minutes later. The incident occurred around 9:30 p.m., after sunset and in limited moonlight." (Read more) 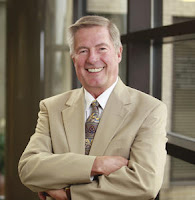 "Lage began his newspaper career in 1969 with Winsor Newspapers in Canton, Ill.," The Southeast Missourian's Bob Miller reports. "By age 25, he was publisher of the Boonville Daily News and publisher of free publications in Jefferson City, Mo., and Columbia, Mo." He was president of newspaper operations for Paxton Media Group LLC, based in Paducah, Ky., and general manager of The Paducah Sun, a 25,000-circulation daily. The Paxton family owns the Paducah television station, which is in the same market as Cape Girardeau. Lage joined Rust, another family-owned company, in 1993. As he did in Paducah, he oversaw acquisitions and startups of many daily and weekly papers, totaling about 50 for Rust. He was inducted into the Missouri Press Association Hall of Fame in 2008. (Southeast Missourian photo)

"Wally was a remarkable newspaperman and a great friend," said Jon Rust, co-president of the company. "He will be greatly missed. We've been hearing from people from Seattle to Maine about his death. He touched the lives of many people." Lage is survived by his wife Dori, four children and seven grandchildren. (Read more) Funeral arrangements are incomplete.
Written by Al Cross Posted at 8/20/2010 04:06:00 PM