Rural teatment for drug abuse is lacking, but a new option has helped 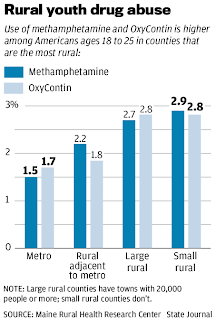 Deaths from drug abuse in rural America are outpacing those in urban areas, but just nine percent of treatment programs are found in rural areas. The Maine Rural Health Research Center found that 82 percent of rural residents live in a county with no detoxification provider, David Wahlberg of the Wisconsin State Journal reports as part of the Madison newspaper's Rural Health project. "Drug abuse overall is lower in rural places than in metropolitan areas, federal surveys show," Wahlberg writes. "But rural youth use more alcohol, methamphetamine and prescription painkillers, drugs that are cheap and easy to get." (State Journal chart)

"For years, medical treatment for addiction to opiates such as heroin and the prescription painkillers OxyContin and Vicodin was limited mostly to clinics offering methadone, a replacement drug that prevents withdrawal symptoms and reduces highs," Wahlberg writes. Methadone clinics are particularly hard for rural residents to use because they are maionly located in larger cities and require daily visits. In 2002, the government approved Suboxone as an alternative to methadone, which has greatly expanded treatment options as doctors can prescribe the drug in their offices and require only weekly visits.

The federal Substance Abuse and Mental Health Services Administration reports "Suboxone is considered less risky than methadone but also less powerful, so it can be less effective for addicts with high levels of opiate dependence," Wahlberg writes. Still, David Friedman, director of the addiction studies program at Wake Forest University, said Suboxone has been important for bring drug abuse treatment to rural areas. "The idea was to mainstream addiction treatment," he said. "Having an alternative to methadone is a real good thing." (Read more)
Written by Jon Hale Posted at 8/05/2010 02:31:00 PM