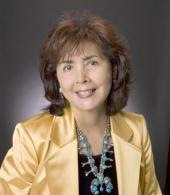 While most of the country will be focused on the balance of power in Congress resulting from Tuesday's elections, the Navajo Nation is poised to complete its own significant election. "The 300,000-member nation will hold its presidential election tomorrow in what front-runner and New Mexico state Sen. Lynda Lovejoy, right, calls a turning point for Navajo history: She has a good chance of becoming the group's first woman president," Amanda Peterka of Environment & Energy Daily reports. "And her running mate, Earl Tulley, would be one of the most outspoken environmentalists elected to the vice presidency."

"We're getting more and more excited," Lovejoy told E&E Daily. "We have a lot of support. People are just looking forward to a new leader for the Navajo Nation -- a brand new leader, new ideas, a fresh face, just a fresh government." Lovejoy, who lost in her bid for president four years ago, downplayed the role that gender has played in the campaign. "That's not really why I'm running. I happen to have the kind of leadership skills, I believe, in my abilities and in my leadership quality," she said. "I just happen to be a female." Still, Cate Stetson, a New Mexico American Indian law attorney, called Lovejoy's success stunning.

"It's a really interesting society with women having a lot of responsibility in the family and in the community, and yet, of course, there's so many of them -- the men -- well, they get like men and think that that's the way it should be because it's always been," Stetson told Peterka. Lovejoy's opponent Ben Shelly, who declined an interview request from E&E Daily, recently plead not guilty to charges of fraud, conspiracy and theft after allegations he used discretionary funds to benefit his family. The Navajo Nation also faces a major change in the structure of the Navajo Tribal Council, which will drop from 88 members to 24 on Jan. 11. (Read more, subscription required)
Written by Jon Hale Posted at 11/01/2010 04:39:00 PM