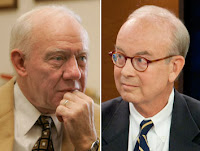 More rural Democrats in the House have been added to the list of those that expert observers consider at risk in Tuesday's election, in which Republicans are expected to take control of the chamber.

Politico also noted that Cook moved Rep. Chellie Pingree of Maine's 1st District into the toss-up column. Nate Silver of The New York Times' political blog, Five Thirty Eight, projected that Pingree still has a three-in-four chance of winning, but that is down from a 97 percent chance his statistical estimates gave her 10 days ago.

Silver projects defeat for Democratic Rep. Lincoln Davis of Tennessee's 4th District, the nation's fourth most rural, with a rural population of 68 percent. Silver says Davis has only a 27 percent chance of winning, and that he will lose to Republican Scott DesJarlais by 5.2 percentage points. He also says freshman Democratic Reps. William Owens (NY-23) and Tom Perriello (VA-5) will lose. They represent the ninth and 11th most rural districts. And he predicts the defeat of veteran Rep. Ike Skelton of Missouri's 4th District, the 18th most rural in population.