'Farm animals are not pets,' we are reminded 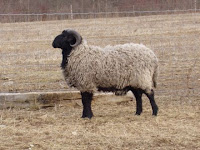 Peter Davies, one of the owners of Turkana Farms in Germantown, N.Y., writes a farewell story about his very special ram, Suleyman the Magnificent, on the AgriCulture blog of Rural Intelligence, a news site for four counties in New York and Connecticut. Its headline, "Farm animals are not pets," is a useful reminder to urbanites who migrate to rural areas. (Rural Intelligence photo)

Suleyman, sire of 20-plus lambs a season, must leave the farm, "not because of any problem with him," Davies writes. "Indeed, we do not want to let him go. But to avoid inbreeding we need to bring a new ram in to increase the genetic diversity of the herd. Suleyman is that rare ram who has been gentle—a quiet, dutiful presence who has never seriously challenged us."

That was in contrast to previous rams, who were downright mean. Both animals were taken to the auction house after they attacked their owmers, apparently unprovoked and unexpected. One had to be beaten back with a feed bucket, and the other was struck repeatedly with a heavy oak stick until Davies could retreat to the barn. "There was no doubt now that he was out to kill me," he writes.
Written by Lu-Ann Farrar Posted at 2/17/2011 03:39:00 PM