Agricultural irrigation is draining the Great Plains aquifers, which are a finite resource

The aquifers of the Great Plains are being depleted. Researchers from Colorado State University say only 57 percent of current refuge pools for life in the Arikaree River in eastern Colorado will remain over the next 35 years, and those will be isolated on a single-mile stretch of the river, reports Science Daily. This study focused on the Arikaree, but researchers say all 11 headwaters of the Republican River in Nebraska and Kansas "face the same fate." (Map of Republican River Basin, containing the Arikaree and Republican Rivers. Click on map for larger version.) 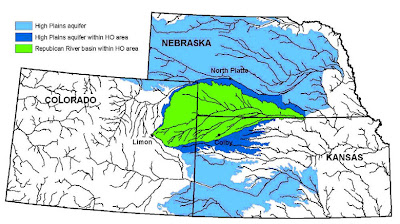 Regional aquifers were filled by glaciers during the last ice age, researchers say, and can't be replenished with rain and snow. "That water has been there for thousands of years, and it is rapidly being depleted," researcher Jeffrey Falke told Science Daily. "Already, streams that used to run year-round are becoming seasonal, and refuge habitats for native fishes are drying up and becoming increasingly fragmented." Pumping of regional aquifers is almost entirely done for agriculture, with about 90 percent for corn production irrigation, along with alfalfa and wheat. Depletion of the water table affects ground-water dependent grasses that support livestock grazing.

Researchers concluded that a 75 percent reduction in groundwater pumping would be needed to maintain current water-table levels and refuge pools, something that isn't "economically or politically feasible." Dryland streams in the Great Plains provide habitat for several warm-water fish species that have adapted to harsh conditions; but, "increased fragmentation of their habitats may impede their life cycle, limiting the ability of the fish to recolonize," the researchers say. (Read more)
Written by Ivy Brashear Posted at 12/05/2011 01:40:00 PM