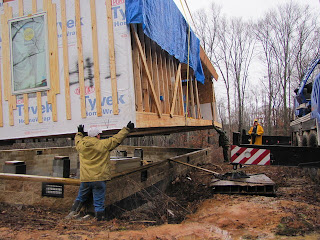 Early last year we reported that a home-grown rural industry, houseboats in Southern Kentucky, could be revived by a project to have the idled plants turn out modular units for houses on land. Now two prototypes have been built and the next step is refining the process to reduce costs and make the approach economically feasible, reports Bill Estep of the Lexington Herald-Leader. (H-L photo: Half of a modular house was put on its foundation last month.)

The idea was conceived by Kentucky Highlands Investment Corp., a nonprofit venture-capital firm working in southwestern Kentucky, and was refined by the University of Kentucky College of Design, with help from UK's Center for Applied Energy Research. One goal is "to promote development of energy-efficient homes that could appreciate in value, as an alternative to aging houses and mobile homes in rural Kentucky that are not efficient, resulting in high electricity costs for owners," Estep reports. "Federal grants totaling $1.25 million helped finance the design and construction of the prototypes."

The modules were built at the Stardust Cruisers houseboat factory near Monticello, a town near Lake Cumberland that promotes itself as the "Houseboat Capital of the World" but has seen employment in the industry plummet during the recession. "The factory had 12 full-time and 12 contract workers in 2009 when the project started; it had 56 full-time employees in early December, Kentucky Highlands said in a news release," Estep reports. "Not all that growth resulted from the energy-efficient housing project."

As the project tries to meet its goals of $100,000 cost per house and $1 a day in energy costs, it is exploring other products such as multifamily structures, temporary classrooms, "military housing, disaster-relief housing and vacation homes," Estep reports.
Written by Al Cross Posted at 1/02/2012 01:54:00 PM

Nice post.Thanks for Sharing.Vee Eee Technologies can't wait to read much more from you. This is actually a terrific site.'ll follow your blog even more when you'll keep up the good work