"The eyes may be the window to the soul, but the mouth provides an even better view of the body as a whole," The Wall Street Journal's Melinda Beck writes in her Health Journal column. "Some of the earliest signs of diabetes, cancer, pregnancy, immune disorders, hormone imbalances and drug issues show up in the gums, teeth and tongue—sometimes long before a patient knows anything is wrong. There's also growing evidence that oral health problems, particularly gum disease, can harm a patient's general health as well, raising the risk of diabetes, heart disease, stroke, pneumonia and pregnancy complications." (WSJ graphic; click on it for larger version) 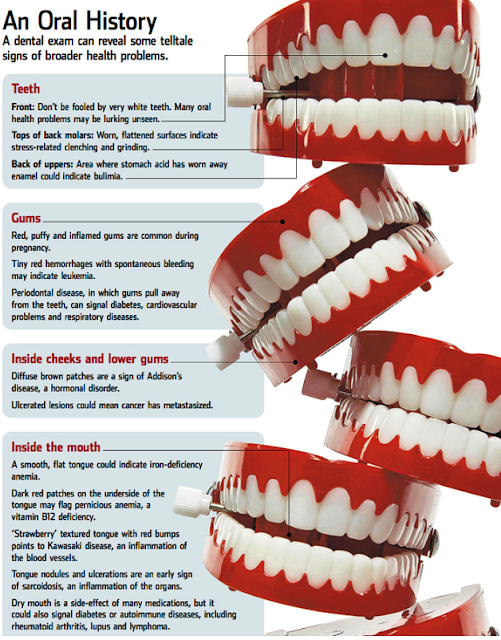 Beck adds, "Such findings are fueling a push for dentists to play a greater role in patients' overall health. Some 20 million Americans—including 6 percent of children and 9 percent of adults—saw a dentist but not a doctor in 2008, according to a study in the American Journal of Public Health this month."

Beck urges her readers not to be fooled by shiny white teeth. "In fact, many dentists worry that people who whiten their teeth may have a false sense of complacency, since their teeth can still be harboring tooth decay and serious gum disease," she writs. "Even people who have no cavities can still have inflamed and infected gums." She quotes Mark Wolff, an associate dean at the New York University College of Dentistry: "Whiteness and the health of your teeth are totally unrelated." (Read more)
Written by Al Cross Posted at 1/02/2012 04:16:00 PM

Very Nice your tips.........
we are appreciate your tips. Keep update....
Thanks for sharing.
Dental Implants Danbury

Yeah it is true that while in seeking treatment of reverse gum disease you come to know that oral health is an area that can spiral out of control if left unchecked and reports show that addicts have very poor oral hygiene.