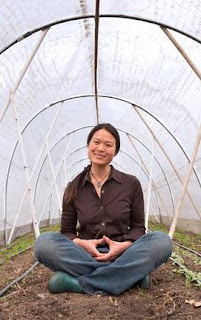 Over the years, many university agricultural extension programs have adapted to changing times, sometimes overshadowing farming with classes about sciences and humanities, but now continuing education extension classes are returning to farming because people living in cities, towns and suburbs are increasingly interested in small-scale farming, reports Phyllis Korkki of The New York Times. Extension agents have been offering beginning-farmer classes in response to demand, which require a different lesson plan than classes for seasoned farmers. (NYT photo by Jim Craven: Oregon small-scale urban farmer Aluna Michelle)

Students in urban agriculture range from seasoned gardeners to people seeking to make a career of it. They learn how to maximize time and space, how to farm organically and the fundamentals of entrepreneurship and marketing, including "the ins and outs" of farmers markets.

Dennis Lukaszewski, University of Wisconsin Extension urban agriculture program coordinator in Milwaukee, told Korkki that small-scale gardening on at least one acre of land can provide a significant boost in income. He said it's possible to make $7,000 to $8,000 a year in the area if a gardener puts in 20 hours a week. University of Florida agent Robert Kluson helped set up "Annie's Project," which is for women who want to be "agri-preneurs." He also helps students deal with zoning laws, and has started to network of small farmers "because he found that many of them fell prey to isolation," Korkki reports. (Read more)
Written by Ivy Brashear Posted at 3/02/2012 04:06:00 PM