When high school basketball teams get into state tournaments, they usually try very hard to stay in them for as long as possible. But two teams in Texas and Georgia voluntarily opted out of their state tournaments for two very different reasons. Retired weekly newspaper editor and educator Harry Hix, who was president of International Society of Weekly Newspaper Editors, outlines the two situations on his blog, writing, "I find one reason compelling; the other saddens me." 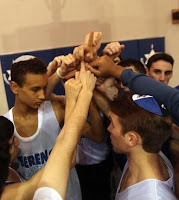 Houston's Beren Academy, an Orthodox Jewish school, forfeited one game away from the championship because the late Friday afternoon game time conflicted with the Jewish sabbath, during which the team does not compete. The school asked the Texas Association of Private and Parochial Schools to swap times with another game, but the TAPPS executive board voted unanimously to deny the appeal, reports Angel Verdejo of the Houston Chronicle. (Chronicle photo)

The team had avoided the situation twice, when opponents agreed to reschedule games, Hix writes. The TAPPS athletic director said the school was aware when it joined the organization that tournament games were only played on Fridays and Saturdays. "No TAPPS teams are allowed to play sports on Sundays, when Christians traditionally worship," Hix notes.

UPDATE, March 2: "Some Beren players and parents filed a lawsuit," Hix reports, and "Rather than contest the matter, TAPPS Executive Director Ed Burleson opted to amend the game time to accommodate Beren’s Jewish Sabbath observance. If Beren wins today and advances to the championship game, that game will be played at 8 p.m. or later Saturday to avoid conflict with the Jewish Sabbath."

Warren County High School in Georgia forfeited its regional tournament game with Hancock Central High School, a move that prevented the school from competing in any postseason games. Superintendent Carole Jean Carey said it was "one of the most gut-wrenching decisions we have ever made," reported Wayne Staats of The Augusta Chronicle. In October, a brawl broke out between the two schools after a football game, and the Warren County coach was beaten with a helmet and had to undergo "major surgery," Hix writes. Carey said she feared the violence would recur.
Written by Ivy Brashear Posted at 3/01/2012 05:49:00 PM