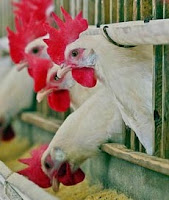 Researchers at Johns Hopkins University and Arizona State University have found a class of antibiotics banned by the Food and Drug Administration are still being used in livestock feed, MeatingPlace reports. Fluoroquinolones, antibiotics used to treat infections in humans, were found in eight of 12 samples of feather meal, a supplement added to chicken, pig, cattle and fish feed. The Department of Agriculture banned use of this class of antibiotics in 2005 because some bacteria in humans were becoming immune to fluoroquinolones. (The Guardian photo)

David Love, lead author of the study, published in Environmental Science & Technology, said the research "strongly suggests the continued use of these drugs" despite the FDA ban. Researchers analyzed commercially available feather meal samples from six states and China, and found the active ingredients from Tylenol, Benadryl and Prozac in them. They also found inorganic arsenic in all 12 samples.

The National Chicken Council released a statement saying the study "looked at chicken feathers and not chicken meat," Meatingplace reports. The group contends chickens in the U.S. are not given arsenic additives in feed or any other drugs mentioned in the study. "If consumers were to take away one message from the findings, it should be from the researchers themselves: 'We haven’t found anything that is an immediate health concern'," the group said. (Read more)
Written by Ivy Brashear Posted at 4/06/2012 11:33:00 AM