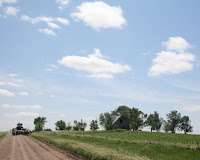 "It’s not difficult to see the dominant trendline in agriculture when nearly every view of the landscape provides evidence," writes Heidi Marttila-Losure in the summer issue of Dakotafire, a regional reporting project of small news outlets in the eastern Dakotas.

"The tractors and planting rigs that were out in the fields this spring were double the size they were a generation ago; a farmer can cover hundreds of acres in a day," she writes. "Simply put, there are bigger farms, and fewer farmers.The percentage of the workforce employed in agriculture in the United States declined from 22 percent to 2 percent from 1930 to 2002, and since then it’s fallen still further, to something less than 1 percent." (Photo by Martilla-Losure)

And there's a problem with that, she notes, and it's something, sadly, people get around to talking about only after they've discussed big-farm economics. It's this thing about rural communities getting more economic and social benefit from mid-sized farms than from large ones.

Large farms, Martilla-Losure writes, buy in massive quantities, usually going to larger outfitters in larger communities or to direct suppliers for better prices. Some, in fact, are bound by contracts with corporations to buy from a certain much larger supplier, so there's not even an option for shopping local.  Small and mid-sized farms, on the other hand, stay home to buy. Research bears that out. Farms with a gross income of $100,000 made nearly 95 percent of their expenditures locally, according to the Pew Commission on Industrial Farm Production's "Community and Social Impacts of Concentrated Animal Feeding Operations" report. Farms with gross incomes higher than $900,000 spent less than 20 percent locally. (Read more)
Written by Amy Wilson Posted at 9/21/2012 11:33:00 AM