The Healthy, Hunger-Free Kids Act, the Obama administration's effort to mandate more fresh fruit, vegetables and whole grains into the diets of school children, has some uphill climbing to do and it's not just the kids who are complaining. Though, admittedly, they were the first. Sarah Gonzales of Agri-Pulse took a look at some rural school districts trying to implement the law in advance of the law's implementation deadline, to see how the new science-based standards were working in real lunchrooms. What she found were complaints from student athletes who thought they needed more calories and more options, and substantial increases of good food thrown in the garbage. They also got this parody of "The Hunger Games" from some ingenious Kansas kids:

Dawn Matthews, director of food service for the rural Camdenton school district in Missouri, serves 3,200 school lunches every school day to kids in every grade level from K-12. The new standards, drawn from recommendations from an independent panel of doctors, nutritionists and other experts, require better nutrition and allow schools to serve between 550-650 calories for students in K-5, 600-700 calories of students for 6th through 8th grades, and 750-850 for high school lunches. Agri-Pulse reporters explain that a daily lunch costs $2.10, but almost 60 percent of the meals are offered for free for a reduced price in this rural district. Matthews notes that participation in the program is dropping with the new menu in place. 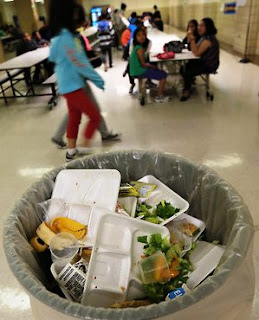 Urban kids don't like the lunches, either, reports Vivian Yee of The New York Times. (NYT photo by Librado Romero: A Manhattan school where seventh-graders called vegetables "gross.") Even before the deadline for the act to be put into effect, Gonzales notes, Reps. Tim Huelskamp, R-Kans., and Steve King, R-Iowa, introduced the No Hungry Kids Act last month to repeal the new school guidelines. The National Association of State Departments of Agriculture also issued a recent policy statement saying the initial law was "well-intentioned, but falls short of providing a comprehensive policy for educating students in healthy living."

The results of the first few months of trial -- especially the waste -- have been "disheartening," said food director Matthews. It is also early. "I think it's going to evolve over time," said the chairman of Florida's Lake County School Board, Roseanne Brandeburg. "If you're in elementary school, and this is what you're going to be served, you're going to get used to it."