As dams crumble, states can't keep up with inspections and repairs; look up your local dams 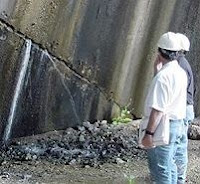 "The number of deficient dams in the U.S. — those with structural or hydraulic issues that increase the risk of failure — is rising dramatically, outpacing the rate at which they can be fixed. But as austerity continues across governments, funds for inspection and upkeep are static or shrinking in most states," Jim Malewitz of Stateline reports. Last year, there were just 422 full-time state employees overseeing more than 87,000 dams in the entire country. Of those dams, 11,388 were listed as "high-hazard," which means they are likely to fail and cause deaths. Many dams exist in rural areas, where rivers have been dammed to create water supplies for urban areas. (Interior Department photo: employees inspect leaking dam)

There's little help on the way from state legislatures, and dam safety advocates hope federal legislators will pick up the slack. When it returns after the election the U.S. Senate will be asked to reauthorize the 2006 National Dam Safety Act, an annual $14 million program that expired a year ago. That program helped states retain staff, educate dam owners and buy essential equipment.

Most dams were built before 1970, including more than 2,000 that are more than 100 years old, and are very prone to damage that could cause failure. State dam inspectors have a hard time keeping up. Alabama doesn't have a safety program, leaving its more than 2,000 dams un-inspected. South Carolina employs fewer than two full time-equivalent workers to oversee its 2,380 dams.

With so many dams to inspect, states classify them by estimated hazard, but changing demographics can lead to faulty classifications. "Suburban development has pushed into rural areas where engineers long ago planned dam construction with only agriculture in mind," Malewitz explains. "Those dams were considered low-hazard; failure meant only flooded land -- not inundated homes or businesses or threatened lives." (Read more)