Feral hogs are here to stay, but can be controlled 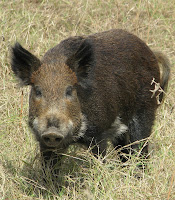 Feral hogs, once found primarily in the Southeast, have spread to more than 40 states in the north and west. It took about 20 years for them to spread, but once they took hold, they kept spreading. "If you're one of the lucky few who live in a state that hasn't been infested with feral hogs, it's likely your time is coming," Burt Rutherford of Beef magazine reports. Though the animal is considered exotic, it becomes a pest, and many people can't seem to figure out how to get rid of them. (Texas A&M photo)

Texas A&M University extension wildlife biologist Ken Cearley told Rutherford that once the hogs take hold, they're almost impossible to extirpate. "We've come to think of it as much like brush control," he said. "The real measure of success in living with the rascals is reducing the amount of damage they do." They can create a lot of damage on range and farmland, rooting down as much as a yard, searching for food and tearing up the land. They can also eat young calves and other small animals, displace wildlife and can carry as many as six different diseases. Cearley said they've done at least $52 million worth of damage just in Texas.

Experts say landowners can prevent as much as two-thirds of that damage by using a variety of control methods, including trapping and hunting. Several processing plants in Texas accept feral hogs and ship the meat overseas. Texas also allows shooting of feral hogs from the air. (Read more)
Written by Ivy Brashear Posted at 12/21/2012 12:43:00 PM