Some in Appalachia have prison buyer's remorse

"Rural communities, especially in Central Appalachia, recruit prisons hoping to land jobs. But some Eastern Kentucky leaders who got prisons now question their decision, saying the jobs haven’t materialized and the prisons drain local resources," reports the Daily Yonder, introducing a story by Sylvia Ryerson of WMMT-FM  in Whitesburg, Ky.

In the 1990s, a third "of all rural prison construction nationwide occurred in four of the most economically depressed regions in the country . . . the West Texas Plains, South Central Georgia, the Mississippi Delta and the coalfields of Central Appalachia," Ryerson reports, citing Department of Agriculture research and noting three more coalfield prisons have been built since. (Click on map for larger version) 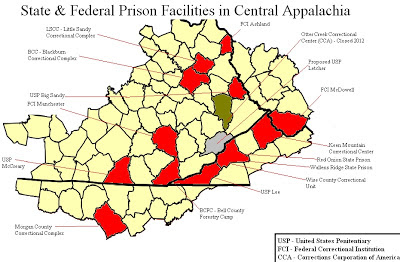 While the prisons were touted as job creators, the federal Bureau of Prisons' tough employment standards eliminated most of the unemployed and underemployed people in McCreary County, Kentucky, on the Tennessee border. "Of the 300 and something employees that work at the prison, I don’t think we have over 25 or 30 local people that are working there," former county judge-executive Blaine Phillips told Ryerson. "And the others . . . they don’t chose to live here. It was not what they were telling us at first.”