Influx of Hispanics has been good for population and economy of rural counties, study shows

A recent study reported increases in both Hispanic populations and rural incomes, and suggested a connection. Dennis Coates and T.H. Ginlding published a paper in the journal Contemporary Economic Policy titled "Is Hispanic Population Dispersion Into Rural Counties Contributing To Local Economic Growth?" It found that an influx of Hispanics has helped many rural economies. The Daily Yonder published an excerpt of the findings. (USDA map; click on it for a larger version) 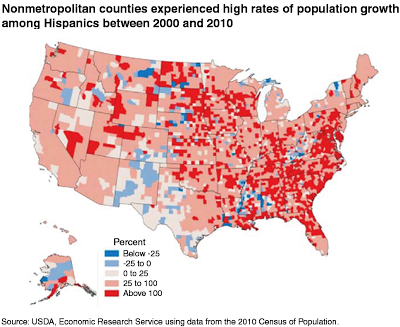 The study says the trend of depopulation from young people moving out of rural areas and into metropolitan ones "slowed and in some cases reversed in some non-metropolitan areas, largely as the result of growth in the Hispanic population into these rural areas," starting in the 1990s.

Significantly, a boost in population from Hispanic immigration is often self-sustaining, as immigrant families have children and bring the age demographics of an area down.

"Small communities experiencing declining population and tax base as a consequence of the substantial out-migration of their working-age natives were revitalized or prevented from losing their local plants by the arrival of hardworking immigrants who were willing to accept practically any kind of job, including the cold, wet, repetitive, and injury-prone jobs in meat-processing plants where the low wages were nonetheless higher than farm wages and several times the wages in the immigrants' home countries," the study said.

The study authors focused on "the simple issue of whether faster growth in the population caused by the influx of Hispanics is linked to faster growth in income per capita in rural counties."They found that the answer was yes: A growing Hispanic population in rural communities was linked to a growing per capita income, although the same did not hold true in small or large metropolitan areas.  Rural communities suffering from depopulation were the beneficiaries of the trend.  (Read more)
Written by Martha Groppo Posted at 2/15/2013 01:45:00 PM