"Medora," new documentary opening this week examines one of Indiana's most impoverished rural communities through the eyes of its high school basketball team. But it's not a story of a championship team carrying the community on its back. In fact, the team is the worst in the state. What the film does is get an up-close and personal look at rural life in a once-prosperous town that has fallen on hard times, and showcases the lives of a group of students trying to survive while trying their best to improve their station in life. 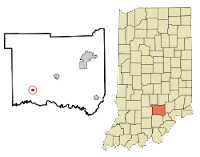 Of the 700 residents in Medora (left, in Jackson County; Wikipedia map), about 74 percent have a high school diploma, but less than 1 percent have a college degree, and 18 percent are unemployed, according to City-Data. The average median household income in 2011 was $26,989, well below the state average of $46,438. Nearly 28 percent of residents are divorced.

The film was inspired by a 2009 New York Times article in which John Branch wrote: "Players for Medora High School have taken the court wearing work boots because their families cannot afford basketball shoes. Most smoke cigarettes. Some talk openly of drug use. All but a few come from broken homes. Poverty rates are high here, college graduates few. Drug use is rampant, several said, and many residents live in ramshackle trailer homes strewn about the hills that surround the checkerboard streets of the town. In these depressed times, there is little to cheer but the high school basketball team. Except it does not win."

Filmmakers Davy Rothbart and Andrew Cohn spent two years making the film, Edirin Oputu reports in Columbia Journalism Review. Cohn told Oputu: "When we got to the town … it just seemed like a really magical place. My first instinct, I remember talking to Davy, was ‘How does this place exist?’ There’s a bank, a bar, a school, a mill, and liquor store, and yet people still live in this town. The trend has been people leaving to go to these larger towns. And so Davy and I wanted to explore what keeps these people here: the identity, the sense of camaraderie." (Photo from "Medora")

Rothbart told Oputu that "one of the political elements of the film that I’m happiest that we managed to include" was when the mother of the Hornets’ power forward "talked about how she works in a factory and just how poor they are. I think there’s a misconception, or a misperception, by a lot of Americans that if people are struggling, if they’re on welfare, it’s because they’re lazy, they don’t want to work. In Medora there’s no jobs. And if you’re lucky enough to be one of the few that has a job, what you’re paid is not really enough to feed a family or keep a roof over your head." (Read more) The film opens Friday in Los Angeles and New York. Its website is here.