Nan Ezzell, matriarch of family that helped set standards for courage in rural journalism, dies at 93 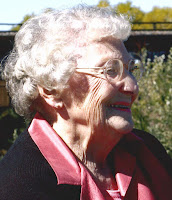 Nan Ezzell, who nurtured two generations of crusading community journalism over more than six decades in the Texas Panhandle, died Sunday in Canadian, Tex. Ezzell, 93, was publisher of The Canadian Record, having succeeded her late husband, Ben Ezzell, and handed the editorial reins to their daughter, Laurie Ezzell Brown. The family won the 2007 Tom and Pat Gish Award for courage, integrity and tenacity in rural journalism, given by the Institute for Rural Journalism and Community Issues, which publishes The Rural Blog.

Nancy Catherine Morgan Ezzell and Ben Ezzell moved to Canadian in 1947 and eventually bought the weekly newspaper. "As co-editors and publishers of the Record, they won countless regional and state awards and were widely respected by their fellow journalists," reads the obituary her daughter-editor wrote for this week's Record. "Her much-loved column, 'Petticoat Patter,' appeared in the Record pages each week for over 55 years." (Read more)

Nancy's daughter, Laurie Ezzell Brown, co-editor and publisher of the Record, told Jon Mark Beilue of the Amarillo Globe-News, "She believed a newspaper was vital to a community. She never wavered in that. It was difficult sometimes. We lived in a tumultuous time politically and in the community, and there were times threats and attacks were made on the family. But my mom was a very gentle dignified person and peacemaker. It was difficult for her, but she stood steadfastly by Dad’s side. I don’t remember her questioning what we were doing, the importance, or the necessity in taking a political position that wasn’t necessarily popular." Laurie said of Nancy's column, "If she was critical of something, she was nicely critical. Her column was for women, and in the beginning, it was on traditional roles of women. But she evolved and was a feminist, and believed in women’s equality and women’s rights.” (Read more)
Written by Al Cross Posted at 11/05/2013 01:36:00 PM