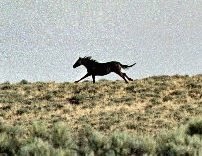 The federal government is asking the public to help it find a solution to the nation's wild horse problem, devoting $1.5 million from the fiscal year 2014 budget to allow the Bureau of Land Management to figure out what to do about the 40,000 wild horses in 10 Western states, Lenny Bernstein and Brady Dennis report for The Washington Post. The BLM "is inviting anyone with a legitimate idea of how to curb the horse and burro populations to step up and propose it. The agency will study the ones it finds most promising and try again to find a solution."  Ed Roberson, the BLM’s assistant director of resources and planning, told the Post, "We need all the help we can get."

The BLM manages 50,000 horses and burros sent to pastures and corrals, "feeding 33,608 horses in pastures at $1.30 per head each day and 16,160 horses and burros in 'short-term corrals' at four times the expense, officials said. The temporary stays can last as long as 18 months," the Post reports. The BLM "says that the open range it manages can support 26,677 horses and burros and estimates that 40,605 are roaming that land," the Post writes. "A National Research Council study released in June concluded that the agency may have undercounted by 10 to 50 percent and that horse populations were probably growing at 15 to 20 percent every year." The agency has tried adoption and fertility darts but has had little success with either venture. (Read more) (BLM graphic)