Obamacare has passed the first big hurdle, but many more remain; impact differs from state to state

Monday was the deadline for starting open enrollment for policies offered through the health-insurance exchanges created under the federal health-reform law, and there were signs that final-day rush of signups pushed the total close to the Obama administration's goal of 7 million. But it remains to be seen how many of those people actually pay their premiums and how many of them are young people whose participation is considered essential to the law's success.

"With millions of people signing up, the law has cleared one long, difficult set of hurdles and has defied the darkest predictions of its critics. But that doesn't mean it's out of the woods entirely—it's just on to the next long, difficult set of hurdles," writes Sam Baker of the National Journal. "The national total doesn't say much about of the law's sustainability or what happens to premiums next year. Premiums will go up, because premiums go up every year. The size of next year's premium increases depends on enrollment and demographics in each state, and even within specific regions of each state. Some states are faring better than others," as the Kaiser Family Foundation map below shows. 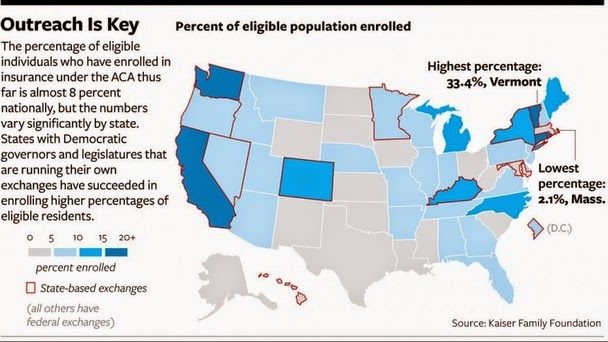 "Generally, if the risk pool in a particular market turns out older and sicker than expected, insurers are more likely to raise their premiums," Baker writes. "We don't know precisely what insurers expected—they all priced their plans independently, and the law includes several programs designed to absorb any surprises and keep premiums as steady as possible. In competitive markets, insurers likely will try to keep increases to a minimum, but industry insiders caution that hikes are looking likely, at least in some parts of the country."

"The biggest question by far," said Drew Altman, president of the Kaiser Family Foundation, is how people will like their plans, and the proportion of winners (those who couldn't get affordable coverage) to losers (those who had to get more expensive policies that may not include their doctor or preferred facility). But even the winners might "sour on their coverage" as they have to pay thousands of dollars in deductibles before full coverage kicks in, Baker writes.

Charles Ornstein of ProPublica has a good look at how the success or failure of Obamacare can be judged. Chris Cilliza of The Washington Post has a good set of charts illustrating the politics of the law. For a look at how Obamacare was embraced by ruling Democrats in Kentucky, a state with a large rural population, and how it may backfire on them in upcoming elections, read this story by Louisville native and former Post political reporter Perry Bacon Jr. of Yahoo News.