Obesity continues to be an issue among American adults, especially in the South

Americans keep getting fatter, led by the South, the nation's most obese region. In 2013 in Mississippi and West Virginia, two mostly rural states, 35.1 percent of adults were obese, Roberto Ferdman reports for The Washington Post. In 18 states at least 30 percent of adults are obese, and most of the South is included in that list. Only Colorado and Hawaii have obesity rates lower than 22 percent.

Those numbers are a dramatic rise from 1990, when every state had an obesity rate of 15 percent or less, Ferdman writes. By 2000, only Arizona and Colorado were below 15 percent, and by 2010 no state was below 20 percent.

"There is, for instance, a stark racial divide: Obesity rates rates for blacks exceed 40 percent in 11 states and 30 percent in 41 states; for Latinos, they are greater than 30 percent in 23 states; but for whites, they are higher than 30 percent in only 10 states," Ferdman writes. "There is also a wealth divide: Over a third of U.S. adults earning less than $15,000 a year are obese, while only a quarter of those earning more than $50,000 annually carry that distinction. And there's even a generational divide: Baby boomers (adults aged 45 to 64 years old) are more likely to be obese than any other age group." (Read more) (Post map: To view an interactive version click here) 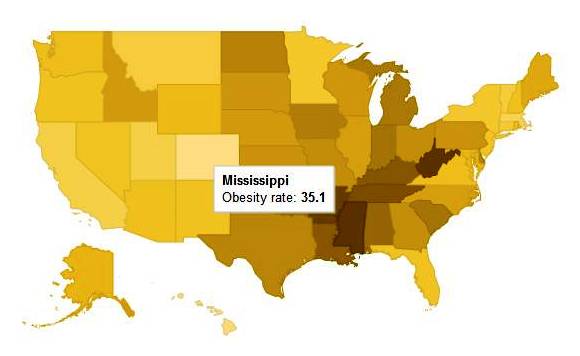