South has the lowest quality of life, study says

The South is the worst place in the U.S. to live, says a study by the Organization for Economic Cooperation and Development that ranked states in nine categories: income, jobs, housing, health, education, environment, safety, civic engagement and accessibility of services. Every area in the world can be examined through an interactive map by clicking here. 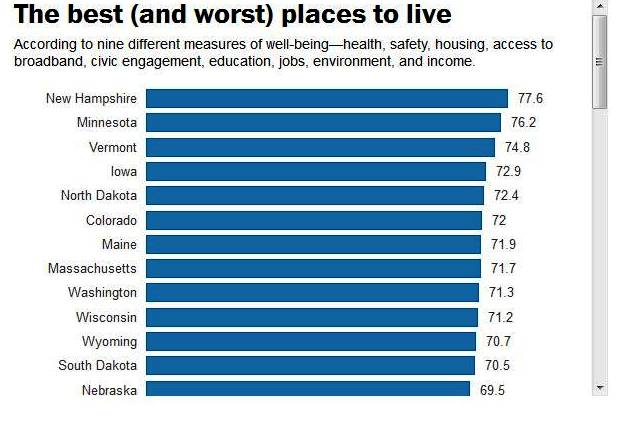 "The study assigned a value from zero to ten (ten being a perfect score, zero being an embarrassment) for each of the nine measures," Roberto Ferdman reports for The Washington Post. "While no state was perfect, New Hampshire, which scored 77.6, is easily the best anyone can do in the United States, followed by Minnesota (76.2), Vermont (74.8), Iowa (72.9); and North Dakota (72.4)." (Post graphic)

"Meanwhile, there are a number of states—all of them in the South—you might want to avoid," Ferdman writes. "Mississippi, which scored lower than any other state, barely broke 50. Arkansas and Alabama, which tied for second to last, each scored 51.3. West Virginia, which was fourth to last, scored 52.2. And Tennessee, which was fifth to last, scored 52.9." Overall, eight of the bottom 10 states are in the South, while only one southern state, Virginia, ranked in the top 25, placing 22nd. (Read more)
Written by Tim Mandell Posted at 10/07/2014 03:35:00 PM