Utah has the most Google searches for Star Wars; where does your state rank?

People in Utah are crazy about "Star Wars." The seventh installment in the series—and first in 10 years—opened last night and is expected to break every box office record that exists. According to Google Trends, no state has done more Google searches for "Star Wars" than Utah, where people are 25 percent more likely to see the movie than the No. 2 state on the list—California—and Utahn are twice as likely to see the movie as people in the two states that have drawn the fewest interest on Google—Oregon and Mississippi, Christopher Ingraham reports for The Washington Post. 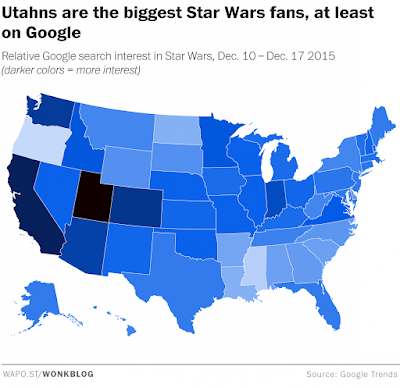