Shortage of rural obstetrics services expected to get worse; 46% of counties lack an ob-gyn

Nearly half—46 percent—of the nation's counties, most of them rural, lack obstetrician/gynecologists and 56 percent are without a midwife, according to the American College of Nurse-Midwives. Numbers are only expected to get worse, with the American Congress of Obstetricians and Gynecologists projecting the OB-GYN shortage to reach 6,000 to 8,800 by 2020 and possibly 22,000 by 2050, Michael Ollove reports for Stateline. Nationally, there are 20,000 OB-GYNs and 11,200 midwives.

The nation's female population is expected to grow 18 percent from 2010-30 and the Centers for Disease Control and Prevention projects that the number of births will rise to 4.2 million per year in 2030, up from 3.9 million in 2014, Ollove writes. At the same time "the number of medical school graduates going into obstetrics and gynecology residency programs has remained steady since 1980, with about 1,205 residents entering the specialty each year, according to Thomas Gellhaus, ACOG’s president." (Stateline map: Number of OB-GYNs by state) 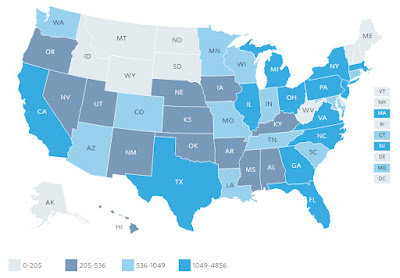 The problem is particularly bad in states that are large in size, but small in population, such as New Mexico, where the closest OB-GYN for some residents is 100 miles away, Staci Matlock reports for the Santa Fe New Mexican. Data from 2011 shows that nine of the state's counties lacked OB-GYN services and seven were without a midwife or an OB-GYN.

Some say the solution for New Mexico and other states that lack rural OB-GYN services is not only increasing midwives but allowing them to play a greater role in offering services, Ollove writes. "Nurse midwives are registered nurses who also complete an accredited graduate school course of study in midwifery. Licensed (or its equivalent) in all 50 states, nurse midwives are trained in all areas of maternal health, usually can prescribe and administer medications, and they deliver babies, almost exclusively in hospitals or birthing centers. (Another class of midwives, called 'certified professional midwives,' perform home births in the U.S., but they are licensed or statutorily authorized in only 29 states.)"

"In half the states, nurse midwives are permitted to practice independently," Ollove writes. "But 25 states require them to practice under the supervision of a doctor or in collaborative arrangements with doctors. But the ACNM and its state affiliates have complained for years that many doctors are unwilling to take on midwives, denying women access to these maternal health care providers."
Written by Tim Mandell Posted at 8/23/2016 01:00:00 PM