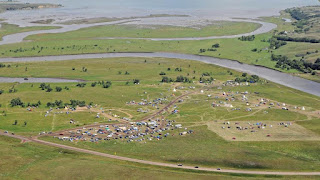 North Dakota’s homeland security director ordered the removal of water tanks that were replenishing the thousands of Native Americans who had converged on the rural town of Cannon Ball to protest construction of the Dakota Access Pipeline, Mike Nowatzki reports for The Forum of Fargo‑Moorhead. Homeland Security Division Director Greg Wilz cited "mounting reports of unlawful activity and the risk of damage." He said, "Based on the scenario down there, we don’t believe that equipment is secure." Native American leaders said people were already getting overheated. (Photo: Protesters near the Missouri River)

The $3.8 billion, 1,150-mile Dakota Access pipeline is expected to carry as much as 570,000 barrels of Bakken crude from North Dakota through South Dakota and Iowa to Illinois. The protest has temporarily halted construction, which began in June. 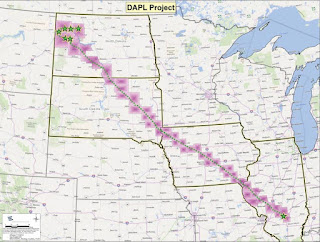 Native Americans have said they fear a leak from the pipeline would harm their main source of water, Phil McKenna reports for InsideClimate News. "The Standing Rock tribe, one of the poorest communities in the nation according to 2010 census data cited by the tribe, relies on the Missouri River for drinking water, irrigation, fishing and recreation, and for cultural and religious practices. The reservation covers about 3,600 square miles along the river." (Dakota Access pipeline map highlights counties traversed)

Republican Gov. Jack Dalrymple, "who issued an emergency declaration Friday to make additional state resources available to manage public safety risks associated with the protest, called Monday for federal officials to help manage the situation," Nowatzki writes. "In an interview with conservative talk show host Scott Hennen, Dalrymple noted the campsite sits on land owned by the Army Corps of Engineers, whose approval of the pipeline’s river crossings led to the tribe filing a federal lawsuit to stop it. A judge will consider the tribe’s request for a temporary injunction during a hearing Wednesday in Washington, D.C."
Written by Tim Mandell Posted at 8/23/2016 09:54:00 AM