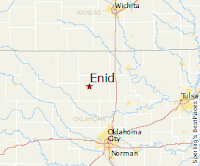 Oklahoma's Enid News & Eagle, since it started publishing in 1893, had never endorsed a Democrat for president -- until its parent company, Community Newspaper Holdings Inc., said Republican Donald Trump "did not meet our company and journalism values, particularly as they related to the First Amendment," CNHI Executive Editor Bill Ketter told Manny Fernandez of The New York Times.

Writing from Enid, Fernandez reports that the paper's Oct. 9 endorsement of Hillary Clinton cost it 162 subscribers and 11 advertisers, "including a funeral home that had a sizable account. Someone stuck a 'Crooked Hillary' bumper sticker on the glass doors of the paper’s downtown office. A man left a late-night message on the publisher’s voice mail, expressing his hope that readers would deliver, to put it delicately, a burning sack of steaming excrement to the paper."

"The News & Eagle’s 730-word editorial showed the raw power of partisanship in small-town America, the extraordinary divisions exposed in this election and the surprising ways in today’s digital media age that newspaper endorsements still have the power to generate a reaction, even if they don’t necessarily change people’s votes," Fernandez writes, quoting Terry M. Clark, the director of the Oklahoma Journalism Hall of Fame and a professor of journalism at the University of Central Oklahoma in Edmond: “There used to be a saying that the editorial page was the soul of a newspaper, and if that’s the case, we’ve got a lot of weak-souled newspapers in the country because they’re afraid to offend anybody,” said  “This is an excellent example of the way American journalism ought to be — standing for something — and, man, it takes guts to do that in Enid, Oklahoma.”

The 10,000-circulation daily had endorsed Florida Sen. Marco Rubio in the Republican primary. For its general-election choice, Executive Editor Ron Collins transformed notes from Publisher Jeff Funk into an editorial saying Trump lacked “the skills, experience or temperament to hold office” with the headline, “For U.S. president: Hillary Clinton is our choice for commander in chief.”

CNHI's Ketter told The Rural Blog in an email that about half of the chain's 68 dailies endorsed Clinton, and "None went for Trump or published an editorial for a third-party candidate. Most of those that did not originate an editorial published one of the pro-Clinton editorials as a guest editorial or column, usually from the paper closest to their geographic home. The loudest objections occurred in Oklahoma, Missouri, Georgia, Alabama, Mississippi, Kentucky and West Virginia. Enid had the strongest response in loss of subscribers and advertisers, as a newspaper in a deep red city in a deep red state."

The chain, which is owned financed by the Retirement Systems of Alabama, had never weighed in on a political endorsement. "We've offered advice on two statewide issues that clashed with our values in the past couple of years -- laws making it legal to fly the Confederate battle flag on government buildings, and religious freedom laws that could legalize discrimination against lesbian, gay, bisexual and transgender individuals," Ketter wrote. "The company's values include a commitment to truth, fairness and integrity; respect for diversity and human equality; acting with courage, not being influenced by political, ideological or commercial pressures in doing what is right and ethical; and upholding the rights of the First Amendment: freedom of press, speech, religion, assembly and petition."
Written by Al Cross Posted at 12/27/2016 06:49:00 PM