"If you had to guess how strongly a place supported Donald J. Trump in the election, would you rather know how popular 'Duck Dynasty' is there, or how George W. Bush did there in 2000?" asks Josh Katz of The New York Times.

"It turns out the relationship with the TV show is stronger. That’s how closely connected politics and culture can be. The cultural divide largely falls along urban/rural lines. We saw a similar divide in November, with Hillary Clinton winning in cities, college towns, Native American reservations and areas with black and Hispanic majorities. Mr. Trump earned more votes in rural areas."


Katz and his Times colleagues developed 50 localized maps, based on the number of active Facebook users who "liked" certain TV shows, such as the very rural "Duck Dynasty" or "Modern Family," which is urban and suburban. "Together they reveal a national culture split among three regions: cities and their suburbs; rural areas; and what we’re calling the extended Black Belt — a swath that extends from the Mississippi River along the Eastern Seaboard up to Washington, but also including city centers and other places with large nonwhite populations. That "region" likes the show "Empire," about a hip-hop music company.

When there were only three TV networks, shows helped define common themes in American culture. Now cable and satellite channels air hundreds of shows, most of which appeal to niche audiences. Times TV critic James Poniewozik says they get more advertising money by appealing to younger, more affluent, urban viewers. "Still, there are shows that find broader appeal," Katz writes, such as "The Vampire Diaries" and "Orange is the New Black," which has "a minority-rich ensemble cast, but it appeals more to a white audience."

The maps show the most popular areas for 50 TV programs. One shows that "The Walking Dead" is most popular in Central Appalachia. The Trump campaign found that the drama's followers were more worried about immigration. The campaign also may have targeted viewers of "NCIS," the top-rated show, which is "most popular in rural areas," Katz reports. “Family Guy,” an animated situation comedy "that sends up American culture . . . is most popular in cities," he writes. "The show’s popularity was more correlated with support for Hillary Clinton than any other show." Here's its map (click on it for a larger version): 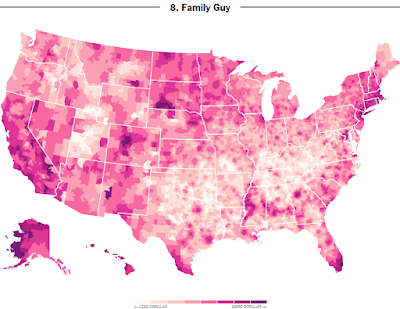