Republican senators who want to delay President-elect Donald Trump's plans to immediately repeal the Patient Protection and Affordable Care Act, until a suitable replacement can be enacted, are mostly from states that expanded Medicaid under the law, Sy Mukherjee reports for Fortune. About 20 million Americans stand to lose coverage if the law is repealed and not replaced.

GOP senators from Alaska, Louisiana, Maine, Ohio and Maine"signed on to an amendment Monday that would essentially delay (although non-bindingly) the repeal process by about a month to give congressional committees more time to craft an alternative," Mukherjee writes, noting that Alaska, Louisiana and Ohio have expanded Medicaid. Other Republican senators from Arizona, Kentucky (expansion states) and Tennessee (where the legislature blocked the governor's expansion plan) "recently warned against a hasty Obamacare repeal sans a replacement."

Mukherjee notes, "A number of red states have ardently refused to go along with the expansion, but Kentucky, Arkansas, Louisiana, Alaska, and other Medicaid expansion states have all seen massive drops in their uninsured rates after adopting it, providing a boon in rural regions where many hospitals regularly see patients who can't afford their care. There's also significant evidence that this newfound coverage has allowed previously uninsured people to access all sorts of basic medical treatments that they never used before, according to the Kaiser Family Foundation." (Kaiser graphic: States that have expanded Medicaid, as of October 2016, are in blue) 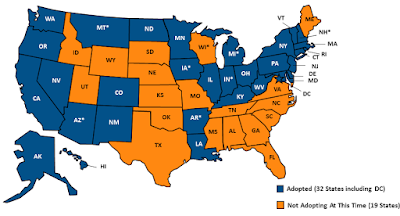