President Trump is taking "the most significant step yet in obliterating his predecessor’s environmental record," today "instructing federal regulators to rewrite key rules curbing U.S. carbon emissions," Juliet Eilperin and Brady Dennis report for The Washington Post. The executive order also lifts a moratorium on federal coal leasing and removes the requirement for federal officials to consider the impact of climate change when making decisions.

The Trump administration also sees the move as a way to restore thousands of lost coal-mining jobs, which the industry and Republicans blamed on President Obama. "But energy economists say the expected order falls short of both of those goals — in part because the United States already largely relies on domestic sources for the coal and natural gas that fires most of the nation’s power plants," Coral Davenport reports for the New York Times. Robert Stavins, an energy economist at Harvard University, told Davenport, “We don’t import coal. So in terms of the Clean Power Plan, this has nothing to do with so-called energy independence whatsoever.”

Trump's order directs the Environmental Protection Agency to begin rewriting Obama's 2015 Clean Power Plan. EPA Administrator Scott Pruitt said in an interview on ABC Sunday that the order will help the U.S. “be both pro-jobs and pro-environment” and described it as the “energy independence executive order.”

The public does not appear to agree with Trump. According to a Pew Research Center survey, Americans support environmental regulation more than regulation of business. "More Americans continue to say stricter environmental laws and regulations are worth the cost (59%) than to say they cost too many jobs and hurt the economy (34%)," the Times reports. Here's a map showing support, by congressional district, for restricting carbon emissions from coal-fired power plants. The map is one of six in the Times that show how Americans think about climate change. (Data from the Yale Program on Climate Communication) 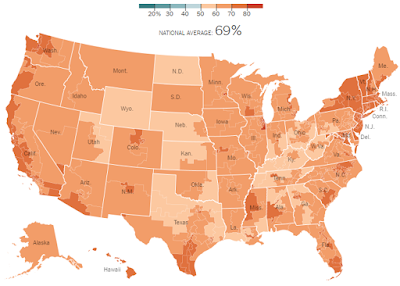 "The order sends an unmistakable signal that just as President Barack Obama sought to weave climate considerations into every aspect of the federal government, Trump is hoping to rip that approach out by its roots," Eilperin and Dennis write for the Post.

"Some of the measures could take years to implement and are unlikely to alter broader economic trends that are shifting the nation’s electricity mix from coal-fired generation to natural gas and renewables," they write. "The order is silent on whether the United States should withdraw from the 2015 Paris climate agreement, under which it has pledged to cut its greenhouse gas emissions between 26 and 28 percent by 2025 compared to 2005 levels, because the administration remains divided on that question."
Written by Traci Thomas Posted at 3/28/2017 11:47:00 AM