The North Dakota Senate passed a bill Monday that would reduce reporting of oil-industry spills, Amy Dalrymple reports for the Fargo Forum. Under the bill, which House leaders say they expect to pass, "The oil industry will no longer have to report spills of oil, produced water or natural-gas liquids that are less than 10 barrels, or 420 gallons, if the spills stay on the well site or facility location."

"The reporting exemption only applies to oil wells and facilities constructed after Sept. 1, 2000, under the version approved by the Senate," Dalrymple writes. "The bill does not eliminate the requirement to clean up all spills. Department of Mineral Resources rules that took effect on Sept. 1, 2000, require well sites to be constructed with dikes that are 'sufficiently impermeable' to provide emergency containment in the event of a spill."

Advocates of the bill, which passed 31-14, say "North Dakota has more stringent spill reporting requirements than the federal government and most other oil-producing states, which can make it appear that North Dakota has more spills than other states," Dalrymple writes. Critics of the bill argue that it's good that North Dakota's rules are more transparent than other states and it would hurt landowners to reduce reporting of spills. (Energywire map: reported oil spills from 2011-14) 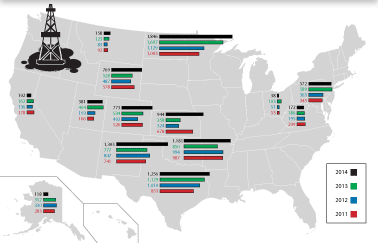