Pa. and Md. districts among those awaiting Supreme Court ruling on gerrymandering

As the U.S. Supreme Court prepares to hear the Wisconsin case challenging the constitutionality of politically gerrymandered voting districts, other legal battles over redistricting continue, reports Michael Cooper of The New York Times.

Redistricting is "the once-a-decade process of drawing new election districts to reflect population changes — an event typically seized on by whichever party is in power to draw maps that favor its incumbents," Cooper notes. The Supreme Court has never struck down a voting map on the grounds that it benefited one political party over another, but the Wisconsin case offers a formula that courts could use to measure partisan skew. Here are some other states with election maps before the courts:

Pennsylvania's 7th Congressional District:
"A Rorschach-test inkblot of a district that has been likened to 'Goofy Kicking Donald Duck,' this district meanders through five counties and is so narrow in parts that it is only the width of a restaurant in King of Prussia and of an endoscopy center in Coatesville, according to a lawsuit filed by voting rights activists last week," Cooper writes. "The suit, filed in state court, contends that Republican lawmakers crossed a line when they redrew congressional boundaries in 2011, creating a map that helped Republicans win control of 13 of the state’s 18 districts even though registered Democrats outnumber Republicans in the state."

Maryland's 6th Congressional District:
"Democrats in Maryland drew plenty of crazily shaped districts to help their party in 2011 — its Third District has been likened to a 'praying mantis' — but a federal lawsuit challenging the state’s last round of redistricting is focused on one: the Sixth District, which yoked Democratic voters from the Washington suburbs to Republican voters in the rural west of the state," Cooper explains. Michael Kimberly, the lawyer bringing the suit, said he had been watching the Wisconsin case. However, Kimberly said his suit was taking a somewhat different approach, arguing that the new Maryland map violated the First Amendment rights of voters.

"Several election lawyers said it was unclear how far-reaching a Supreme Court ruling in the Wisconsin case might be, given that other election maps are being challenged at federal and state levels using different legal arguments," Cooper notes.

Here's a simple explanation (the last example) of how gerrymandering can be used to give advantage to a party that doesn't deserve it. Click on the graphic to view a larger version. 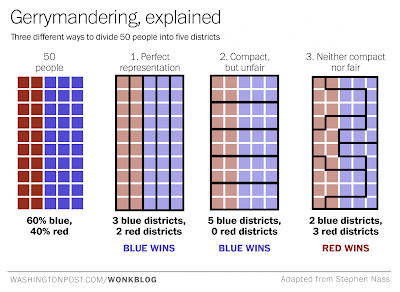