Senate Republicans have so far failed to accomplish their stated goal of repealing and replacing the Patient Protection and Affordable Care Act, for many reasons. Might one be increased news coverage once they released their bill after weeks of secrecy?

Most Americans get the bulk of their information about the issue from the news media, and local television news has a larger overall audience than cable and network news. Local TV coverage of the issue skyrocketed after Republican senators released the first version of their health-insurance bill, and it seems safe to presume that coverage in other local media did, too.

"That drumbeat of coverage in their home districts during Senate debates may have made some GOP senators think twice about angering constituents — including those of their own party," researchers Erika Franklin Fowler and Sarah Gollust write for The Washington Post. Fowler is an associate professor of government at Wesleyan University in Middletown, Conn.; Gollust is associate professor of health policy and management at the University of Minnesota.

To show the jump in coverage after the Senate bill was released, Fowler and Gollust mapped the average mentions of the issue before and after (click on image for larger version): 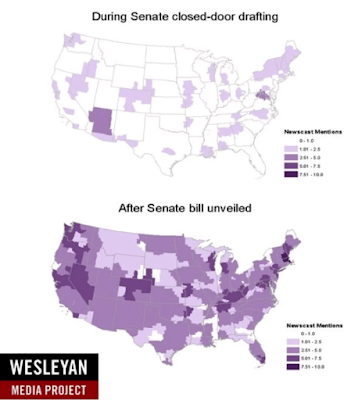 Researchers looked for key words in closed captioning of local news broadcasts in the 201 U.S. media markets from early March, when House Republicans released their bill. While no firm conclusions can be drawn from the increased coverage, Fowler and Gollust have a hunch that the coverage attention to parts of the ACA that were popular but hadn't been well-covered, such as a ban on denying coverage for pre-existing conditions. "If our hunch is right, and local media drew attention to what might be lost . . . then that would help explain why the ACA has grown more popular, and the AHCA less so, the more citizens learned what one did, and the other would not contain," they write.

Fowler and Gollust caution that their research doesn't say how local TV covered the issue, but "a look at the drop in public approval of efforts to repeal the ACA suggests that local TV coverage cannot have made things easier for wary GOP senators."