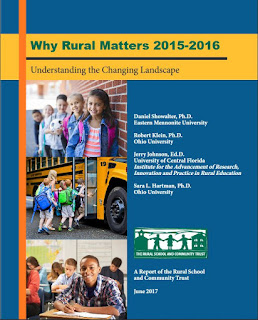 The latest report from the nonpartisan, nonprofit Rural School and Community Trust urges state and federal leaders to make rural students a bigger priority. The new edition of Why Rural Matters includes state-by-state data from 2015-2016 on student achievement, state resources, demographics, college and career readiness, and poverty. The report also ranks states by needs in rural education. The state with the greatest need is Mississippi, followed by Arizona, Alabama, South Carolina, South Dakota, Georgia, Nevada, Florida, Oklahoma, and Alaska rounding out the top 10.

"While some rural schools thrive, far too many rural students face nothing less than a national emergency. Many rural schools and districts face vastly inequitable funding and simply cannot provide the opportunities that many suburban and urban schools do,” said Robert Mahaffey, the organization's executive director. The 164-page report was assembled by Daniel Showalter, Ph.D., of Eastern Mennonite University; Robert Klein, Ph.D. and Sara L. Hartman, Ph.D., both of Ohio University; and Jerry Johnson, Ed.D., of the University of Central Florida's Institute for the Advancement of Research, Innovation and Practice in Rural Education.

Some of the report's findings: