"Even if they weren't able to snuff out Obamacare, Republicans appear determined to ensure its marketplaces accelerate their meltdown," Paige Winfield Cunningham writes for The Washington Post's "Health 202" roundup. With the GOP fractured on what to do legislatively, if anything, a top aide to Donald Trump said the president will decide this week whether to keep funding the cost-sharing subsidies that help lower- and mid-income people pay deductibles and co-payments. The funding is more important in rural areas, because they have lower incomes and fewer choices of insurance, which leads to higher premiums.
Trump has repeatedly threatened to stop the subsidies, as part of a "let Obamacare implode" strategy that he mentioned again Friday. Some expert observers doubt he will do that, but "Trash talking has its own effect," Timothy Jost, a health-reform expert and emeritus law professor at Washington & Lee University, told Mara Lee of Modern Healthcare. "We could see Anthem withdraw from all the markets in all the states if they think he's about to do something really stupid."

Trump could also drop an appeal of a federal court decision that says the payments are illegal because Congress hasn't appropriated money for them. That would put the ball back in the lap of Congress, where Senate Majority Leader Mitch McConnell said after his last-ditch, Republican-only bill was defeated Friday that he wanted to hear ideas from Democrats, but "Bailing out insurance companies without any thought of reform is not something I want to be part of."

Sen. Susan Collins of Maine, one of three Republicans to vote against McConnell's bill and a former state insurance commissioner, said Trump's threats have "contributed to the instability in the insurance market" and "I seriously hope that in the meantime the president doesn't do anything to hasten that collapse." She said the payments are "not an insurance company bailout, but help people who are very low income avoid their out-of-pocket costs . . . It would really be detrimental to the most vulnerable citizens if those payments were cut off." The subsidies are available to people with incomes up to 250 percent of the poverty line.

Collins and some other Republicans want a bipartisan approach, starting with committee hearings on stabilizing the individual market. Sen. Lamar Alexander of Tennessee, chair of the Health, Education, Labor and Pensions Committee, said immediately after the bill's defeat that it "leaves an urgent problem that I am committed to address—Tennessee's state insurance commissioner says our individual insurance market is very near collapse."

Most of Tennessee has only one Obamacare insurer, and Humana, which serves counties around Knoxville and Maryville, Alexander's home, has announced it will heave at year's end. State officials are negotiating to bring Anthem back into the region. Alexander "was one of seven Republicans who broke rank with their leaders and voted against an amendment to repeal the Affordable Care Act within two years, which would have given lawmakers more time to come up with a replacement plan," Michael Collins reports for the USA Today Network.

Bloomberg News is continuing to update its county-by-county interactive maps of individual insurance coverage under Obamacare; here's a screenshot of one map, showing gains and losses: 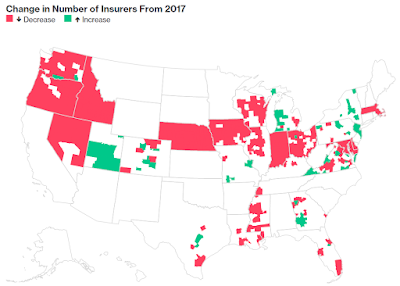