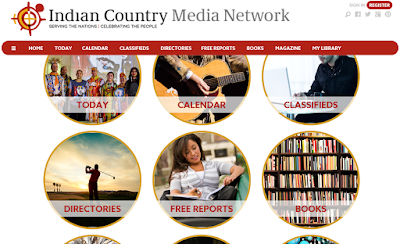 A major source of Native American news has shut down, possibly for good, unless it can find a more sustainable business model to keep it going. On Sept. 4, Publisher Ray Halbritter announced that Indian Country Today Media Network was ceasing production, saying in an editorial that he and others in management were looking at "alternative business models." He told NPR's Leah Donnella that he is looking for ways to best repurpose the publication "in a way that's viable, both journalistically and economically."

Halbritter, the CEO of Oneida Nation Enterprises in New York state, bought the 30-year-old weekly paper in 2011 because he wanted to see more journalism by and about Native Americans. "In media, Native people are often looked at as relics or mascots," he told NPR. "And there's so much more complexity, so much more beauty. There's struggle and nuance to the Native American experience in this country. There was such a great need because the perception and image of Native people was very many times inaccurately portrayed, and as a result, the truth about Native people was not always presented."

Relying on non-Native news outlets to report on Native Americans meant that important stories were often distorted or not told at all, Halbritter said. When Native Americans tell their own stories, he believes it helps readers to better understand their concerns.

The publication extensively covered the latest studies on inter-generational trauma as well as the controversy surrounding the Dakota Access Pipeline. He told NPR there's one topic he hopes will get more coverage, even if Indian Country Today won't be around to write about it: "The critical issue to me, for Native America, I mean, they have highest teenage suicide rate in the world on Indian reservations. And that comes from, to me, a lack of self-esteem. A lack of even having an understanding, or a perception, or an image about themselves to see any hope for the future."
Written by Heather Chapman Posted at 9/25/2017 12:18:00 PM