Work requirements, likely coming to Medicaid in several states, will be problematic in rural areas short of jobs

The Trump administration gave Kentucky the power to impose work requirements on Medicaid beneficiaries Friday, granting the first of what are expected to be many "waivers" of normal Medicaid rules under a new policy the administration declared days earlier.

Kentucky has many rural areas that are short of jobs, so state officials say they plan to phase in the program, reaching such areas last, under federal rules that "allow states to account for local conditions, such as high unemployment in certain areas or other factors, to provide exemptions from a work requirement," Dylan Scott reports for Vox.

Rural areas could have "less robust transportation, and fewer social support services, all things that might lead a state to provide an exemption from the work requirement," Scott writes. Because rural areas are "more likely to be white . . . the result, intentional or not, is that black people on Medicaid — because they are more likely to live in urban areas, where those grounds for exemption are less likely to be found — could face a higher burden under these waivers."

The Kentucky plan will require Medicaid members to report changes in their income, employment or volunteer status, and require them to pay small, income-based premiums, or be dropped from the program for six months. They could re-enroll more quickly by taking a health- or financial-literacy course, but critics of the plan say the reporting and payment system (to be handled by managed-care companies) will be a bureaucratic obstacle that will keep some people from getting health care.

“Documenting compliance will often not be trivial, and even small hassle costs can discourage people from signing up for insurance coverage,” Matt Fiedler, who covers health care policy for the Brookings Institution, told Scott. “Higher hassle costs will likely cause meaningful reductions in Medicaid coverage even among people who are working.” Kentucky's waiver proposal predicted that without it, the state's Medicaid rolls in five years would have about 95,000 more people than with it, the only reasons given being "program non-compliance" and "participants are expected to transition to commercial coverage," but doesn't explain how they will be able to afford that.


"Any approved waivers are expected to be swiftly met with legal challenges," Scott writes. "The issue hinges on whether requiring work for Medicaid can be construed as furthering the goals of the Medicaid program, which contains no explicit reference to encouraging work." Most Medicaid beneficiaries work. Among those who don't, here are the reasons they give: 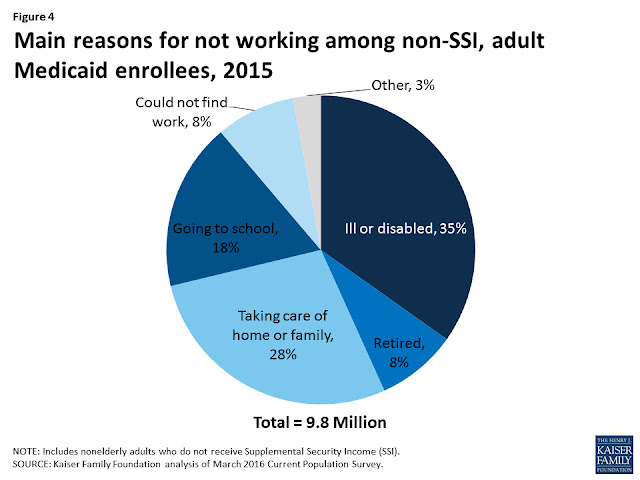